0
was successfully added to your cart.

A regular customer came into the Miner’s Den Sydney store and brought in an enormous 63 KILOGRAM specimen of quartz the other day. He’d found it with his Minelab GPX 5000 metal detector very close (within 25 feet) of his last major find.

He brought in the quartz because I’d asked him to show me the next chunk before he crushed it to extract any gold. We photographed the quartz and found that it did indeed have a strong metal content inside.

This specimen triggered a strong response from the Minelab GPX 5000 metal detector and even the store’s Minelab Pro-Find 25 Pin Pointer before crushing.

The ingot below is HALF of what came out of the specimen: 7,134 grams. The second ingot was almost the same weight.

The large slab of quartz and a smaller one combined to produce just over 14 kg’s of fine gold.

This is the second such specimen brought in by the same prospector within four months. 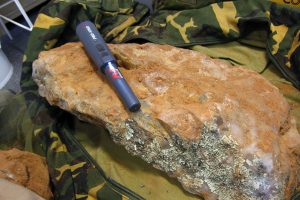 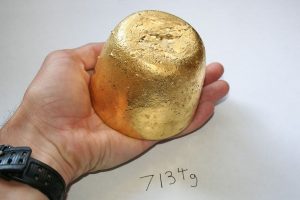 Fresh From The Blog